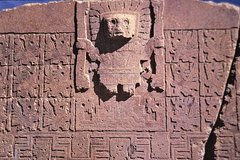 Tiwanaku was the capital of the Tiwanaku empire between c. 200 - 1200 CE and is situated in the Titicaca basin. At an altitude of 3,850 meters (12,600 ft) it was the highest city in the ancient world and had a peak population of between 30,000 and 70,000 residents. The Tiwanaku Empire, at its largest extent, dominated the altiplano plains and stretched from the Peruvian coast to northern Bolivia and included parts of northern Chile. Tiwanaku is located near the southern (Bolivian) shores of the sacred Lake Titicaca and it would become the Centre of one of the most important of all Andean cultures. The architecture, sculpture, roads, and empire management of Tiwanaku would exert a significant influence on the later Inca civilization.

Spiritual and Political Centre of the Tiwanaku Culture

The city of Tiwanaku, capital of a powerful pre-Hispanic empire that dominated a large area of the southern Andes and beyond, reached its apogee between 500 and 900 AD. Its monumental remains testify to the cultural and political significance of this civilisation, which is distinct from any of the other pre-Hispanic empires of the Americas.

The origin of Puma punku. Puma punku is the most attractive ancient site on the planet. It is a unique in the way it was shaped and constructed. The most significant piece of evidence that we have in the entire ancient alien astronaut puzzle can be found in the highlands of Bolivia.