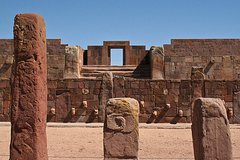 Visit the most antique archeological site of South America, th remains of the first precolumbian empire from the western hemisphere.

During this tour you will discover the traditions and misteries of this sacred place visiting the Sun of the Gate, semi-subterranean temple, Akapana, the buried pyramid, monoliths that represents the priests (or chamans) during the apogue of this empire and Puma Punku, a misterious archeological site.

We will vist the museum where are many remains fron this empire, skulls, tools, golden bijouterie, weapons, textiles and others.

This tour only includes transportation from La Paz and guide.

*This price is applied from 2 travelers, if you are a solo traveler please send us a message to coordinate.

Pick up from hotel, central area around Plaza San Francisco). Tiwanaku is located approximately 1 hour and a half from La Paz.

10:30 a. m. Entrance to the Tiwanaku Museum where you can appreciate the cultural vestige of the Tiwanaku Empire that existed between the years 1580 B.C. until 1180 A. C.

Later we will enter the archaeological site, which is considered a Heritage of Humanity site by UNESCO. We will visit: Templete Semisubterraneo of Kalasasaya: main place where the ceremony took place; Puerta del Sol: monument in commemoration of the Andean calendar where the main figure is the creator God Pachacutec. It is the most well known monument of Tiwanaku; Puerta de la Luna: monument in honor of the Andean goddess of the moon Killa; Ruins of the Pyramid of Akapana: according to some researchers and archaeologists, this pyramid possessed larger dimensions than the pyramids of Gizah in Egypt; Monoliths Bennett, Fraile, Ponce and others.

After the visit to the archaeological site, we continue with a lunch in the town of Tiwanaku and then return to La Paz.