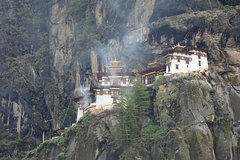 You will hike to Taktsang monastery which is about 900 meters above the Paro valley floor. This hike is open seven days a week and you can hike 365 days in a year. This trail is especially crowded during local auspicious and buddhist special events.

After early morning breakfast, We will take you for a morning hike up to Taktsang Monastery, also known as Tigers Nest. Hanging precariously and magically from a rather steep cliff, the Taktshang monastery is a monument of genuine pride for the Bhutanese nation. It defies architectural principles to the core and amazes tourists from around the world.

It is a sight to behold. Taktsang or the Tigers lair as the monastery is called, it is widely regarded is one of the most important monuments of spiritual significance in Bhutan. Its history is deeply associated with the visit of Guru Padmasambhava, the revered Indian saint who came to Bhutan in the 8th century AD. The cave was named Taktsang after Guru Rinpoche flew into the cave from KurtoeSingyeDzong in eastern Bhutan while riding on a tigress. When he landed in the cave, he took the wrathful form of Guru DorjiDrolo who is regarded as one of the eight manifestations of Guru Rinpoche to decimate the demons.

Several saints have chosen this sanctuary to pray and meditate in solitude. The monastery was built in 1692 by Gyalse Tenzin Rabgaye who is said to be one of the reincarnations of Guru Rinpoche. The Monastery consists of four main temples along with their residences that are constructed along the rock ledge. There 8 caves in total out of which 4 are relatively easy to access.

The monastery was ravaged by fire twice in the 1900s first in 1951 and later the fire of 1998, which nearly destroyed the monastery completely. The government then undertook a comprehensive reconstruction in 200 with funding from foreign donors. The monastery was recreated to its original splendor and re-opened to the public shortly thereafter.

From the road, the hike toward Taktsang follows an uphill route and takes approximately 3-4 hours at an average walking pace on a clear, sunny day. We recommend that you carry sunscreen lotion, large quantities of drinking water, a walking stick just in case you need to shoo of the birds and a hat to further protect yourself from the sun.