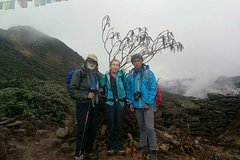 Tour Overview of the Glimpse of Bhutan

Day 1 - Druk Airways flight to Bhutan is one of the most spectacular flights in the entire Himalayan region. Whether flying along the Himalayan range from Kathmandu or over the foothills from Kolkata, each flight is a mesmerizing aeronautical feat and offers an exciting descent into the kingdom.

Evening you can take leisurely stroll around the town's main street. Overnight at the hotel.

Day 2 - After Breakfast drive to Drukgyel Dzong , the ruined fortess from where the Bhutanese repelled several invasion by Tibetan armies. On the way back we visit Kichu Lhakhang, .

After that we take a 2hour drive(55km) towards Thimphu, the modern capital of Bhutan. As we are about to reach Chuzom(Confluence of two rivers Paro and Thimphu) we stop to visit Tamchoe Lhakhang Built by Tangtong Gylepo,( The great brigde builder of Bhutan he is said to have made iron bridges with his bare hands) and now preserved by his descendants.

Along the way we have many more scenic beauties to be enjoyed. On arrival in Thimphu we check-in to the Hotel, if things go as plan plan then there is still time for an exploratory walk before dinner. Overnight at the hotel.

Day 3 - After breakfast, sightseeing of Thimphu valley includes, visit to the National Library, a treasure trove of priceless Buddhist manuscripts. The Traditional Medicine Institute, where centuries old healing arts such as acupuncture and herbal remedies are still practised. The Painting School, where young monks learn the art of Buddhist Thangkha Painting .

After Lunch, we head off to Kuensel Podrang where the we can see the Buddha Dordenma Statue, measuring at a height of 51.5 meters making it one the worlds largest Buddha statue.

On our way back we visit the kings Memorial Chorten continuously circumbulated by His Majesty's subjects, spinning prayer wheels and murmuring mantras.

We then move towards Tashichho Dzong, 'fortress of the glorious dharma'. It is the centre of government and religion, site of the King's throne room, National assembly hall, and seat of Je Khenpo or Chief Abbot. Built in 1641 by the political and religious unifier of Bhutan, Shabdrung Ngawang Namgyal, it was reconstructed in 1961 in traditional Bhutanese manner, without nails or architectural plans.

overnight at the hotel in Paro.

Day 4 - After an early breakfast in the hotel, our representative will drop you to the airport for your flight to onward destination.