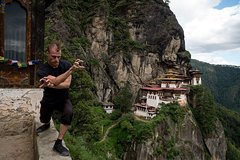 The Land of Thunder Dragon. The Hidden Shangrila. The Roof of the World. No travel destination on earth is more remoteor more beautifulthan Bhutan. Nestled in the high Himalayas, this tiny kingdom fiercely protects its traditional ways of life, and guards its isolation like no other country (Bhutan had no roads until 1962, and no television until 1999). This unique tour offers the rare chance to discover a secret world, explore ancient monasteries, and experience pristine Buddhist culture as it has existed since time immemorial

The flight into Bhutan takes you close to the great Himalayas, offering dazzling scenic views of some of the worlds highest glacial peaks. As you enter Paro valley, you will sweep past forested hills with the silvery Pa Chu (Paro river) meandering down the valley below. Paro Dzong (fortress) and Ta Dzong (watchtower) on the hills above the town will be a fine sight. Our representative will receive you and will drive to Thimphu with sightseeing along the way.
• Drive towards the capital city, Thimphu.
• Stop at Tachoggang and visit the temple and the bridge built by handmade iron chain.
• Overnight at Hotel in Thimphu.

OR IF EVERYTHING FAVOURS WE CAN WITNESS THIMPHU GRAND, TRADITIONAL FESTIVAL FULL OF COLORFUL MASK DANCE

DAY 02: THIMPHU-DOCHULA-PARO(75Km/3 HOURS)
• Drive to Kuenselphodrang where worlds tallest Buddha Statue (169 feet) sits overlooking the Thimphu Valley. Enjoy the spectacular view of Thimphu city.
• Visit National Memorial Chorten: The building of this landmark was envisaged by the third king, His Majesty Jigme Dorji Wangchuck, as a monument to world peace and prosperity. Completed in 1974 after his untimely death, it is both a memorial to the Late King (the father of modern Bhutan ) and a monument to world peace. The paintings and statues inside the monument provide a deep insight into Buddhist philosophy.
• Drive To Paro via Dochula Pass. Drive up to Dochu-la pass (3,088m/10,130ft) stopping briefly here to take in the view and admire the 108 chortens, mani wall, and prayer flags which decorate the highest point on the road.
• Visit to Ta Dzong, which in the past served as watchtower for Paro Dzong and now houses the National Museum.(If time permits)
• Paro Dzong (Rinpung Dzong) built in 1646 by Shabdrung Ngawang Namgyal.(If time permits)
• Overnight at your hotel in Paro

DAY 03: PARO TAKTSHANG HIKE (4-6 HOURS)
• Hike to Taktshang Monastery, one of the holiest and the most beautiful sites of Bhutan.  Taktshang, the tigers lair, acquires its name from the legend of its foundation, when in the 8th Century Guru Rimpoche, widely revered as the second Buddha, arrived from Tibet flying across the mountains on the back of a tigress.
• Visit Kyichu Lhakhang, built in the 7th century by the Tibetan king, Songtsen Gampo.
• Evening free or can visit the Paro town with a street of typical Bhutanese traditional buildings.
• Overnight at Hotel in Paro.

DAY 04: DEPART
• End of your travel to Bhutan. Our team will drive you to the Airport and bid farewell