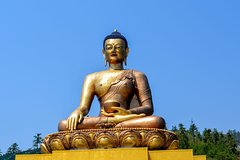 The primary mandate of the company is entirely focused on providing high quality standards trips for guests in letting them experience the extraordinary and the happiness of the Bhutan. We always consider customer satisfaction as our utmost priority.

Pass By: Paro River, Paro Bhutan
Paro valley extends from the confluence of the Paro Chhu and the Wang Chhu rivers at Chuzom up to Mt. Jomolhari at the Tibetan border to the North. This picturesque region is one of the widest valleys in the kingdom and is covered in fertile rice fields and has a beautiful, crystalline river meandering down the valley.

Stop At: Paro Taktsang, Taktsang Trail BT, Paro Bhutan
Paro Taktsang, is a prominent Himalayan Buddhist sacred site and the temple complex is located in the cliffside of the upper Paro valley in Bhutan.
Duration: 7 hours

Pass By: Drukgyel Dzong, Bhutan
Drukgyal Dzong was a fortress and Buddhist monastery, now in ruins, located in the upper part of the Paro District, Bhutan. The dzong was probably built by Tenzin Drukdra in 1649 at the behest of Ngawang Namgyal, Zhabdrung Rinpoche, to commemorate victory over an invasion from Tibet.

Stop At: Buddha Point, Kuenselphodrang, Kuenselphodrang, Thimphu, Bhutan
The Buddha Dordenma is located atop a hill in Kuenselphodrang Nature Park and overlooks the Southern entrance to Thimphu Valley. The statue fulfils an ancient prophecy dating back to the 8th century A.D that was discovered by Terton Pema Lingpa (Religious Treasure Discoverer) and is said to emanate an aura of peace and happiness to the entire world.
Duration: 1 hour

Stop At: Motithang Takin Preserve, Thimphu Bhutan
A short distance up the road to the BBS tower viewpoint is a trail leading to a large fenced enclosure that was originally established as a zoo.
Duration: 1 hour

Stop At: Changlimithang Stadium & Archery Ground, Chang Lam, Thimphu Bhutan
Changlimithang Stadium is a multi-purpose stadium in Thimphu, Bhutan, which serves as the National Stadium. It is predominantly used for football matches and is the home of both the Bhutan national football team and a number of Thimphu-based football clubs who play in both the A-Division and the National League
Duration: 1 hour

Stop At: Tashichho Dzong (Thimpu Dzong), Chhagchhen Lam, Thimphu Bhutan
Tashichho Dzong has been the seat of the government since 1952 and presently houses the throne room and offices of the king, the secretariat and the ministries of home affairs and finance. Other government departments are housed in buildings nearby.
Duration: 2 hours

Stop At: Thimphu Chorten (Memorial Chorten), Thimphu Bhutan
The Memorial Stupa, Thimphu, also known as the Thimphu Chorten, is a stupa in Thimphu, Bhutan, located on Doeboom Lam in the southern-central part of the city near the main roundabout and Indian military hospital.
Duration: 1 hour

Stop At: Simtokha Dzong, 5 Kms South of Thimphu, Thimphu Bhutan
Simtokha Dzong also known as Sangak Zabdhon Phodrang is a small dzong. It was built in 1629 by Zhabdrung Ngawang Namgyal, who unified Bhutan. It is the first of its kind built in Bhutan.
Duration: 1 hour

Stop At: Phajoding Monastery, Phajoding-Pumola Trail Phajoding Bhutan
Phajoding Monastery is a Buddhist monastery near Thimpu in Bhutan. It was one of the richest and most decorated monasteries in the country however due to neglect, it was listed in 2010 by the World Monuments Fund as an endangered cultural monument.
Duration: 6 hours

Stop At: Sangaygang, Thimphu Bhutan
This broadcast tower on top of a tall hill is a popular destination for hikers & drivers.
Duration: 30 minutes

Stop At: Chimi L'hakhang Temple, Punakha Bhutan
Bhutan can be quite a scandalous place! It is possibly, the only place where Phalluses are worn as charms! I swear! They are! And if you find this first line shocking, well, then a quick alert before you proceed to read this post. While there is nothing obscene about the post, it could get you uncomfortable. If you do decide to read on, you are likely to enjoy the fascinating tales of the Fertility Temple of Bhutan  the Chimi Lhakhang. Once you hear the stories, you will realize why the public display of these private parts is not so unusual in Bhutan.
Duration: 1 hour

Stop At: Punakha Dzong, Punakha 13001 Bhutan
The Punakha Dzong, also known as Pungtang Dewa chhenbi Phodrang, is the administrative centre of Punakha District in Punakha, Bhutan. Constructed by Ngawang Namgyal, 1st Zhabdrung Rinpoche, in 163738, it is the second oldest and second largest dzong in Bhutan and one of its most majestic structures
Duration: 1 hour

Stop At: Punakha Suspension Bridge, Punakha Dzong, Punakha 13001 Bhutan
Behind Punakha Dzong stretches the Punakha Suspension Bridge, the longest of its kind in Bhutan. The bridge connects the dzong with the villages on the other bank of the Po Chhu river -- Shengana, Samdingkha, and Wangkha -- where traces of the Divine Madman Drukpa Kuenley can still be found, in the form of local stories, monasteries and markings on rocks.

In these small villages, locals sell their wares in tiny, traditional shops. Visitors can stop here for a quick and authentic view of true Bhutan.

In order to access the suspension bridge from the dzong, one must walk past the Kings palace and the cremation ground.
Duration: 1 hour