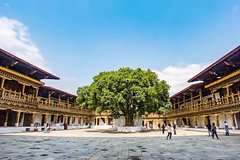 One of the biggest festivals in the Bhutan is the Thimphu Tshechu. This festival is held in the capital city for three days beginning on 10th day of the 8th month of lunar calendar.

Stop At: Clock Tower Square, Hogdzin Lam, Thimphu Bhutan
Clock Tower Square has a tower with four clock faces located in Thimphu, capital of Bhutan. It is a famously known landmark in Thimphu. There are many shops
Duration: 1 hour

Stop At: Tashichho Dzong (Thimpu Dzong), Chhagchhen Lam, Thimphu Bhutan
Tashichho Dzong has been the seat of the government since 1952 and presently houses the throne room and offices of the king, the secretariat and the ministries of home affairs and finance. Other government departments are housed in buildings nearby.
Duration: 1 hour

Stop At: Chimi L'hakhang Temple, Punakha Bhutan
Chimi Lhakhang, also known as Chime Lhakhang or Monastery or temple, is a Buddhist monastery in Punakha District, Bhutan. Located near Lobesa, it stands on a round hillock and was built in 1499 by the 14th Drukpa hierarch, Ngawang Choegyel, after the site was blessed by the "Divine Madman" the maverick saint Drukpa Kunley (14551529) who built a chorten on the site.

Stop At: Punakha Dzong, Punakha 13001 Bhutan
The Punakha Dzong, also known as Pungtang Dewa chhenbi Phodrang, is the administrative centre of Punakha District in Punakha, Bhutan. Constructed by Ngawang Namgyal, 1st Zhabdrung Rinpoche, in 163738, it is the second oldest and second largest dzong in Bhutan and one of its most majestic structures.
Duration: 1 hour

Stop At: Dochula Pass, Thimphu Bhutan
The Dochula Pass is a mountain pass in the snow covered Himalayas within Bhutan on the road from Thimpu to Punakha where 108 memorial chortens or stupas known as "Druk Wangyal Chortens" have been built by Ashi Dorji Wangmo Wangchuk, the eldest Queen Mother. Wikipedia
Elevation: 3,100 m (10,171 ft)
Duration: 1 hour

Stop At: Phobjikha Valley, Bhutan
The Phobjikha Valley is a vast U-shaped glacial valley, also known as Gangteng Valley named after the impressive Gangteng Monastery of the Nyingma sect in central Bhutan, where the graceful black-necked cranes in Bhutan from the Tibetan Plateau visit the valley during the winter season to roost.
Duration: 1 hour

Stop At: Khewang Lhakhang, Wangdue Phodrang, Bhutan
The picturesque and small Khewang Lhakhang (temple) is located just opposite to Tabading across the marshlands in the middle of the Phobjikha valley.
Duration: 1 hour

Stop At: Paro River, Paro Bhutan
The Paro Chhu is a river of western Bhutan. It is a tributary of the Wong Chhu, which is known as the Raidak in its lower reaches
Duration: 30 minutes

Stop At: Rinpung Dzong, Paro Bhutan
Rinpung Dzong is a large dzong - Buddhist monastery and fortress - of the Drukpa Lineage of the Kagyu school in Paro District, Bhutan. It houses the district Monastic Body and government administrative offices of Paro Dzongkhag. It is listed as a tentative site in Bhutan's Tentative List for UNESCO inclusion
Duration: 1 hour

Stop At: National Museum, Tag-Dzong Rinpung Dzong, Paro 12001 Bhutan
National Museum of Bhutan is a cultural museum in the town of Paro in western Bhutan. Established in 1968, in the renovated ancient Ta-dzong building, above Rinpung Dzong under the command of His Majesty, the King Jigme Dorji Wangchuck, the third hereditary Monarch of Bhutan.
Duration: 1 hour

Stop At: Paro Taktsang, Taktsang Trail BT, Paro Bhutan
Taktsang Lhakhang is Bhutans most iconic landmark and religious site. The name Taktsang translates to The Tigers Nest. This temple is one of the most holy sites in the kingdom and clings impossibly to a sheer cliff face 900 meters above the Paro Valley.
Duration: 7 hours

Stop At: Paro Airport Bird's Eye View Point, Paro Bhutan
Considering that this airport is consistently rated as one of the most dangerous, this is a lovely spot to watch the planes come in through the mountains.
Duration: 30 minutes