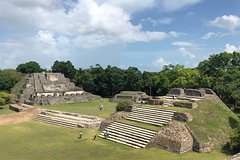 Lost city of the Maya gives you the opportunity to get four excursions, Belize city, the country side, the rum factory and Maya ruins.

This shore excursion is tailored to history lovers which takes you through the old capital 33 miles deep into the northern countryside of Belize. This area is rich with wildlife including armadillos, squirrels, agouti, paca, foxes, raccoons, bats, coatis and over two hundred species of birds.

The Mayan ruin of Altun Ha" is rich with Mayan history and architecture consisting of two plazas and thirteen buildings, of which you will be able to explore and learn about in sixty minutes of interactive discussion with your guide. Afterward, you will have time for souvenir shopping and lunch.

Evidence of the Mayan at Altun Ha dates to 200 B.C. The first major temple was built around A.D. 100 near the principal reservoir, the area that we see now dates to the beginning of the Classic Period (A.D. 250). This was to be the central core of the site for some six centuries. The northern plaza (Plaza A) was the primary ceremonial precinct until close to the end of the Early Classic (around A.D. 550) then work started on Plaza B.

As you drive through the old capital, you will be able to view historical landmarks and observe the daily lifestyle of the locals.