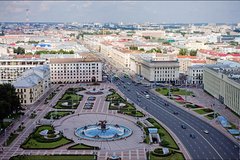 Enjoy Minsks historical sights on this 3-hour private walking tour. Your itinerary can be fully customized to suit the amount of time you have. Tours are fun and interactive, with friendly guides who will tell you funny stories about Minsk, give you the chance to talk to locals, and help you see the city from a Belarussian perspective.

Independence Square is the administrative center of modern Minsk. Conventionally, it can be divided into pre-war and post-war construction. The main building of Independence Square is the Government House, thanks to which the city center has moved here. In unison the architecture of the government house after the war, the main building of the Belarusian State University, the Metropolitan Administration and the City Executive Committee were rebuilt. The oldest building of this square deserves special attention - the church of Saints Simon and Helena, the fascinating history of which you will hear during the tour.What is the best way to immerse yourself in the history and culture of St Petersburg with tour guide? On this tour we will walk around the most iconic points in the city, all the while informing you about the most surprising and interesting details the northern capital.

Freedom Square is the historical center of Minsk. During the tour you will see the place where the city went from, learn the legend about the origin of the name, walk through the monastery quarter, understand why the Mother of God is on the Minsk coat of arms. In addition, you will have the opportunity to touch the money bag of the city with the Magdeburg Law, to hear the battle of the clock on the Town Hall and even sit in the Vojta carriage (mayor), making a wish. On Zybitskaya Street you will have a great opportunity to try Belarusian beer brewed according to old recipes.

The Troitskoye Suburb is a quarter of the 19th century, during a walk through which you visit the old pharmacy, find out what building was located in the 19th century next to the pharmacy, look in the courtyard where people still live, see the building of a real synagogue, and if you are lucky, touch to blooming paparatnik, but most importantly feel like a resident of the city of the 19th century.

Near the quarter of Trinity suburb there is an island of grief and sorrow, created in memory of those killed in Afghanistan, which is also provided for a tour.