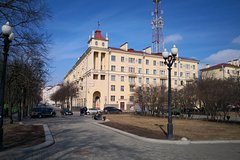 The tour is delivered by certified local professionals whose language level is excellent or close. The tour is tailored to your personal interests and if you'd like a metro ride, that is not a problem.

The main square offers the best examples of prewar and post-war architecture: the Government House, the Red Church and early 1900s dwelling buildings. It makes a nice walk with a view over the beginning of Independence Avenue, one of the Europe's longest main streets.

One of the vastest country's square offers a Soviet interlude between the Old Town and Independence Square. Palace of Republic, Trade Unions' Concert hall and the prewar Officer's club are the local highlights. And a few steps aside to take a look at the President's office!

Victory Square is an excellent opportunity to discuss war in Belarus. The occupation claimed every fourth life in the country and the memorial speaks of that. Also, the square is lined by the last buildings of the Soviet style called "Staline Empire" and make a sight of their own. Last but not least, Lee Harvey Osvald lived nearby for 2 years.

A very cute walking area with two important sites: the Island of Tears dedicated to Belarusians who died in overseas wars and a panorama over the Old Town. The suburb used to be the end of Minsk but now it's very much in the center of the city.

Known as the Upper City or the Old Town, the area has some history left: Holy Spirit Cathedral on top of other highlights. Gostiny Dvor and the former Jesuit Church have seen Karl XII and Peter the Great though the Town Hall has been recently restored. The observation pad offers views over central Minsk including our next stop - the Trinity Suburb.