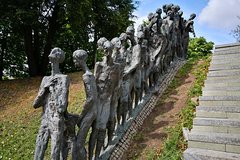 The tour is delivered by certified local professionals whose language level is excellent or close. The tour guide specializes in Jewish heritage theme in Belarus. The tour is tailored to your personal interests and if you'd like a metro ride or a food market stop, that is not a problem.

The main square offers the best examples of prewar and post-war architecture: the Government House, the Red Church and early 1900s dwelling buildings. It makes a nice walk with a view over the beginning of Independence Avenue, one of the Europe's longest main streets.

Victory Square is an excellent opportunity to discuss war in Belarus. The occupation claimed every fourth life in the country and the memorial speaks of that. Also, the square is lined by the last buildings of the Soviet style called "Staline Empire" and make a sight of their own. Last but not least, Lee Harvey Osvald lived nearby for 2 years.

The Pit Memorial is just one out of several sights we are going to see in the ghetto area. The Minsk ghetto had 40 blocks that constantly kept shrinking as people brought into the ghetto were murdered. We will see several buildings from the era and the site of the old Jewish cemetery which is now a park. After the ghetto walk we will drive to the site of Maly Trosteniec, by some estimates, the 6th largest death camp in Europe.