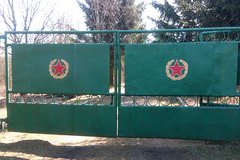 Exclusive private tour to a secret Soviet command center! This is the only such place in the whole world, which survived in its original condition and my private tour is the one in Belarus, and i guess in whole world too. Fantastic time machine hidden in belarussian forest. This trip will be great for everyone, and will be fantastic surprise for people who is interested in history of the 20th century, cold war, Soviet Union, military objects and are tired of castles and monasteries.

Hi, dear travelers! Welcome to Belarus - state in the heart of Europe. Our country is beautiful, safe, clean and very hospitable. Now we have 30 days visa-free time for tourists, and it is great opportunity to explore medieval castles, old towns, beautiful nature and other attractions. There are many guides, who can show that. But i have something special, spicy, extraordinary...are you ready?

Belarussian Soviet Socialistic Republic (BSSR) was one of the most powerful parts of the Soviet Union. Red banned Belarussian military district included about 230000 soviet troops of different branches from motorized division to Strategic Missile Troops equipped by latest weapons. Huge airfields with dozens of strategic bombers, intercontinental ballistic missiles, air-defence forces, secret command centers, tank armies and many other soviet power was concentrated here. One of the strongest world armies every minute protected Soviet Union and Its peaceful sky. But it was hit from behind by traitors gorbachev and eltsin. Enemy of the state appeared to be not only outside, but also inside. It was sad end. Soviet army abandoned Belarus and left a lot of military objects which were very expensive, high-technology, highly effective and became unwanted for the betrayal government. Chaos began. And in this hard moments civil marauders began to stole everything from recently super secret bases. All equipment and machinery were sold as a metal scrap. People proved to be so greedy and stupid, that destroyed facilities of its own army, which protected them.

But one Soviet secret command center was saved by local authorities! And i will show you this fantastic place! You will fill the spirit of Soviet army, plunge into cold war atmosphere, enjoy massiveness and monumentality of this building. I will tell you its story, purpose, interesting facts, technical parameters and whatnot. This is the only such place in the whole world, which survived in its original condition and my private tour is the one in Belarus, and i guess in whole world too. Fantastic time machine hidden in belarussian forest. This trip will be great for everyone, and will be fantastic surprise for people who are interested in history of the 20th century, cold war, Soviet Union, military objects and are tired of castles and monasteries.

Our trip duration is about 8 hours. I'll drive you by authentic Soviet\russian generals car GAZ 3102 "VOLGA" (Exclusive!). You will feel yourself as a Soviet high officers.

Timing:
-pick up at your hotel's lobby (free in Minsk) or at the airport (extra charge)
-way to the secret command center 2h 30m. While this, we'll see the beautiful fields and forests. Certainly, we'll have some coffee breaks on the way.
-The tour in a secret command center 1.5 hours.
- lunch at a local cafe, 1 hour
- way back to Minsk, 2h 30m.

But that's not all! I have good news for you! There are 2 incredible places which you can also visit during this trip for extra charge.

1. Secret Soviet nuclear ammunition storage military base. This is not a joke. This place had 3 security levels, and even most part of officers, who worked on this base didn't know, that nuclear bombs were stored there. Now this base has no security, some buildings are ruined, but the most interesting survived. And while standing in front of huge metal security doors of former super secret soviet nuclear base, you can't wrap your head around the fact, that all this is real. Time duration 1h 30m.

2. Enormous Soviet airfield with a lot of special military airplane hangars. The place where strategic bombers, attack aircrafts, fighters and its crews served to their Motherland. Very impressive place. The size of hanger security doors you will remember for a lifetime.