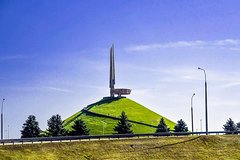 You will be able to get know more about 2nd World War history and places it took place.

Our driver will pick you from any hotel, apartmetment in Minsk, or Minsk airport.

After the tour he will bring you back to Minsk.

The Central Committee of the Communist Party of Belarus made a decision in January 1966 to build a memorial complex Khatyn in memory of the hundred of Belorussian villages, destroyed by Nazis during the years of the Second World War, and also in memory of the great tribute and numerous lives sacrificed for the victory by Belorussians.

The Mound of Glory (Belarusian: Курган Славы) is a memorial complex honouring Soviet soldiers who fought during World War II, located 21 km from Minsk, Belarus on the Moscow Highway. Designed by O.Stakhovich and sculpted by A.Bembel, it was established in 1969 on the 25th anniversary of the liberation of Belarus during Operation Bagration (1944).