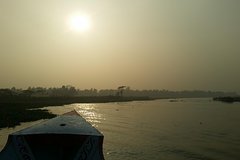 You will have a tour guide who knows your own language which will make you more comfortable and your journey more enjoyable.

It is called Pink palace. it is a very big palace or the rich people of Dhaka during the British colony.

It is called a living museum in dhaka. the tourists like the old town most because they can see all kinds of people and things in old town.