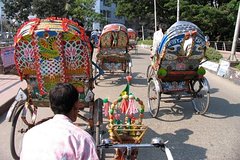 Special Attractions: A Delicious Dinner With a Local Family in old town.

Explore the buzzing Dhaka a combination of historic sights and vibrant culture; the capital of  160 million people. Discover the typical life and places of interest of messy Dhaka. Visit all key attractions of the capital and the rhythm of life in the old town. Enjoy a pulling Rickshaw Ride and walking through small narrow streets, meeting people & community of four religion in harmony.

Get Picked-up by your guide from your centrally located Dhaka Hotel at 8.00 hours. Youll be transferred first to the National Parliament Building, a magnificent building designed by American architect Louis Isadore Kahn. After that you will explore until 12:30 hours visiting National Museum, Dhaka University Area some parts, Language Martyrs Monument from Mother Language Movement of 1952, Khan Mohammad Mridha Mosque, Lalbagh Fort from Mughal Dynasty. You will stop to have your lunch in a local cuisine restaurant. After lunch resume your visiting until end of the trip; you will visit then Dhakeshwari Temple (National Hindu Temple from 12th century during Sena Dynasty,  The beautiful Star Mosque, very typical Shakhari Bazar by walking, "Ahsan Manzil-The Pink Palace" (The Palace of the local King of Dhaka), and the Buzzing Sadarghat central River port; Experience the busy connections and transfers across the  River Buriganga with a wooden Rowboat. After that you'll be transferred to a very friendly local family home to receive an warm reception by family members; You will be delighted with a traditional Dinner with family members sit together. At 19:00 hours you'll have your return transfer to your respective hotel. Dhaka is chock a block of different traditions and customs; where youll find thousands of subject to shoot; paradise for street photography.